Tomorrow, beginning at 6:00pm, the City Council will hold a special study session on the city budget. This will be the first of several agenda items on the topic between now and adoption of the budget later this summer. For those who take special interest in the governance and operation of the city, I encourage you to participate in your city's budget-making process. The city is facing some new challenges and will need to make some difficult decisions in order to ensure that a balanced budget is approved.

At tomorrow's meeting the staff will provide an outlay of the city's anticipated expenses and revenues, provide the public with a five year budget projection, and answer questions. The council will have the task of beginning to outline what our priorities will be under an adjusted budget. Subsequent meetings will include revenue opportunities, options for expenditure adjustments, and council decisions with final budget approval.

Below is a copy of Attachment H from tomorrow's agenda item on the budget. This sheet offers the best snapshot into the change in trajectory taking place in the city budget. 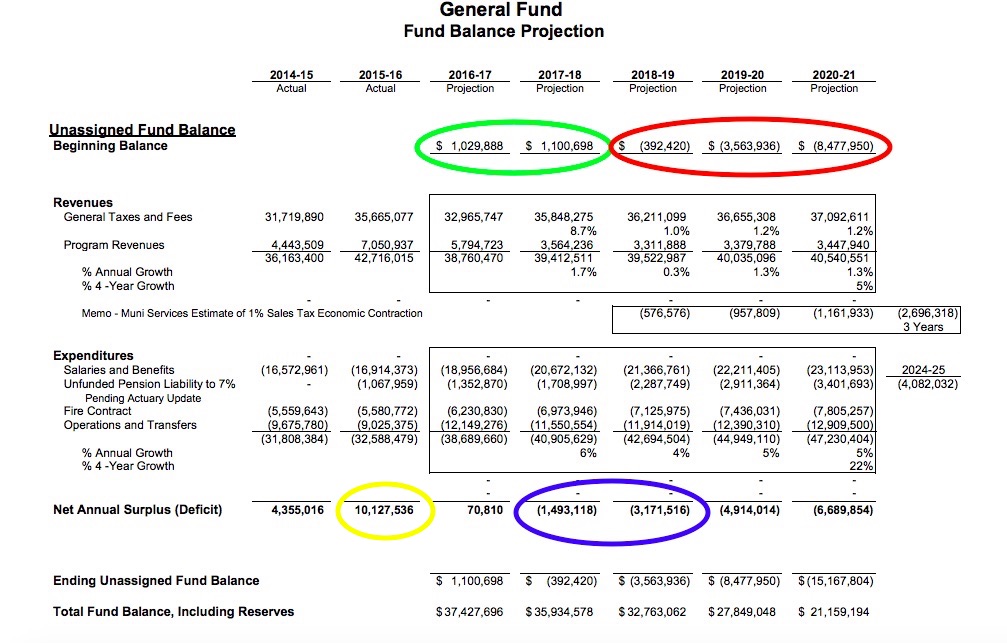 The "unassigned fund balance" is the beginning balance of funds in a given year that were surplus revenues carried over from the prior year that had not been assigned to a special or reserve fund of some kind at the end of the prior year. Take a look at the unassigned fund balance for the start of FY's 2016-17 and 2017-18, circled above in green. As you can see, we began this current cycle (2016-17) with just over $1m in surplus unassigned funds from the prior FY. We project that we will have about the same amount of funds unassigned as we begin this coming FY on July 1st.

Note now the unassigned fund balances projected for FY's 2018-19, 2019-20 and 2020-21, circled in red. These figures reflect deficits. These are the anticipated unfunded costs to our city in the absence of changes to our budget. When you examine the revenues and expenditures below those figures you will notice that increases to expenditures primarily contribute to this change. In particular, under expenses, take a look at the row that reads "Unfunded Pension Liability to 7%." Along with salaries and benefits, this row reflects the single-greatest change impacting our city's budget: pension liability.

The state announced late last year that the investment portfolio for CalPERS, the state's retiree pension investment plan, was not yielding returns that had been forecast. As a result, the state made the decision to adjust something known as the "discount rate," which has a direct impact on what cities must contribute toward their employee pension obligations.

This change will have a major impact on how Emeryville and other cities deliver services. Because the rate of return on pensions had been over-estimated by the state, cities have underestimated what their total unfunded pension obligations are to employees. As a result, many cities will have to make cuts to services and other programs in order to meet these obligations.

Returning to the spreadsheet above, if you look at the yellow circle, you will see that the city ended the most recent budget (2015-16) year with over $10m in surplus. If you go to the top of the next column you'll see that about $1m was carried over as unassigned. Where did the rest of that money go? Pensions. The city has historically done the smart thing and funded several special reserve funds in years where we had surpluses. One such fund was a special reserve fund to help cover unfunded pension liabilities. Although the fund's current balance of $13m is nowhere near enough to cover the new obligation created by the state's discount rate adjustment, it buys us a little time to get our house in order for the big changes we must adjust to in light of what's happening at CalPERS.

To get a better idea of how much Emeryville's pension liability is going to change as a result of the changes the state made, please consider the following graph, which shows the estimated total contribution the city must make against its CalPERS obligation each year to account for the current retiree and employee pension obligations. As you can see, there is a huge growth in city contributions coming over the next 20 years and we must begin planning for it immediately. 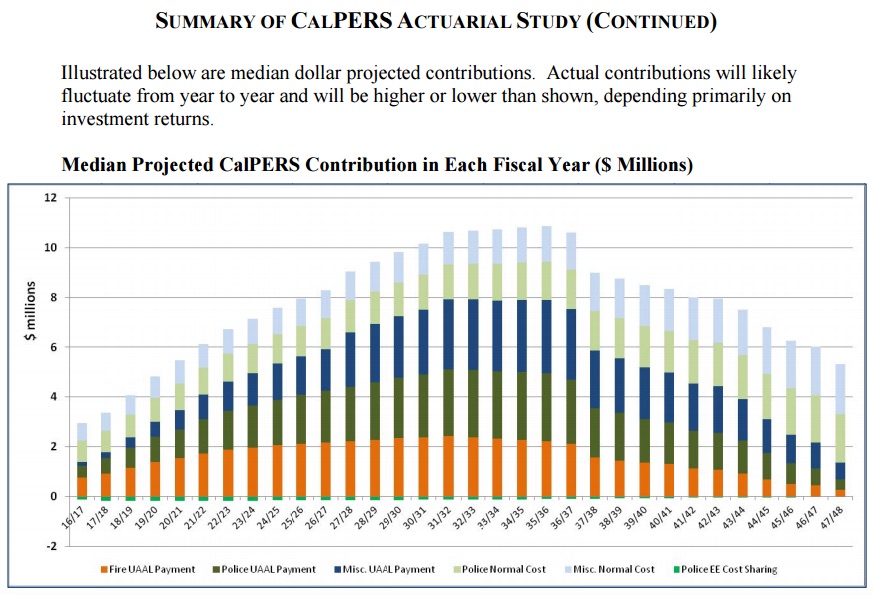 Finally, returning to the first graphic, if you look at the two annual losses circled in blue, you'll see what we will try to address in these coming meetings. These two figures represent the net expected losses projected over each of the two years in this coming budget cycle - about $4.6m total. Structural changes within the city's budgeting scheme will be required in order for us to deliver lasting, sustainable savings that protect the city's core services. In identifying those changes, council will have to determine funding priorities and evaluate risk.

Other challenges exist as well. As detailed in the chart below, the current budget projections assume modest revenue growth, with an expanded range of between 1% growth and 1% loss annually. Sales tax receipts account for a full quarter of our city's revenues. The decline of brick and mortar retail in 2017 has been a well-documented phenomenon to date. With the growth of online sales quickly outpacing storefront sales in some sectors and younger consumers turning to technology for shopping, local governments need to innovate to keep revenue streams afloat. I have pushed us to expand investment in economic development initiatives, invest and integrate our community with small business and diversify our revenue sources. These practices can help us adapt to changes that are coming to the national economy. 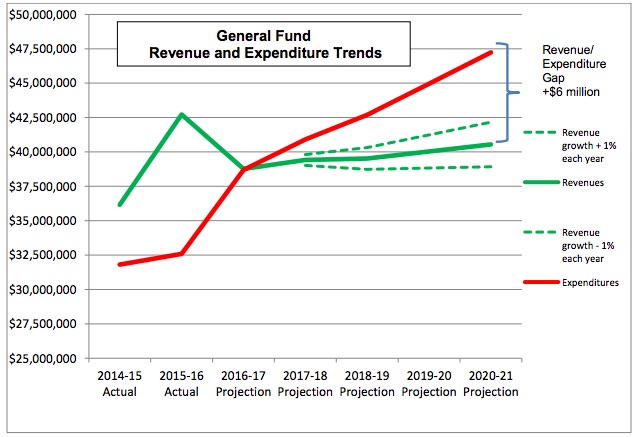 As previously noted, the city has done some good things that put us in a place many other cities envy: we have stored up reserves equal to 50% of our annual operating costs; we socked away over $13m that will help us confront our newly expanded pension liability; and we have saved up funds to assist with capital improvements that are critical to the city's infrastructure over the next five years. These good historical practices will help us in the coming years.

Additionally, new opportunities for revenue are on the horizon. The advent of a legalized cannabis industry and the desirability of our city's geography position us to generate new revenue. Current developments underway such as the Public Market, Transit Center and Sherwin-Williams will generate new fee revenues for the city. Council will consider a couple additional revenue items for voter approval in 2018 that can help alleviate the burden of growing costs as well.

While normal economic cycles suggest that a recession is coming, the City of Emeryville has taken steps in the past 8 years to prepare itself for these changes. We must once again act with foresight for the future of our fiscal health and make structural changes to our budget that will preserve quality services for the community in years to come.

I hope you will share your thoughts with us as we move through this process over the coming two months.